my journey with Yahshua (Jesus) 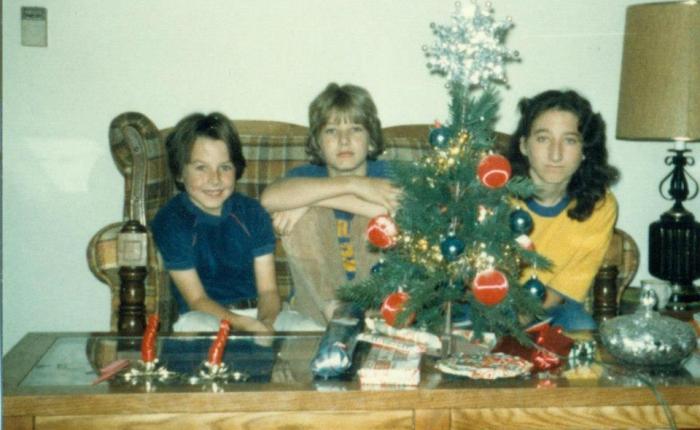 It was 198?. i was 8ish years old. We lived in Burbank, CA. on Keystone Street. It was a budget crunch year for the family, and we had the option of a Christmas tree or buying a Christmas present for the grandparents. The parents left it up to us kids. The three of us decided on buying our grandparents a gift. That meant no tree. However, not entirely. We did own a small, and by small, i mean not much more than a foot tall fake tree. We decorated it and placed it on the coffee table. So, in the end, it was three feet tall.

i don’t recall what we purchased for the grandparents. i am sure it was lovely. i can tell you, however, what i got that year! With great anticipation, looking under the coffee table, i wondered for weeks, “what could these gifts be?!?” i would pick them up and give them a shake or two, no hint was revealed. Finally, the day arrived! Christmas!!! i was so excited. But we waited. No gifts that year until after the Christmas dinner. We waited for our relatives to arrive. They did. With them, MORE GIFTS! i believe this picture (featured image above) was taken on Christmas day just before we opened the gifts . . . But i could be wrong.

“Fear not, for behold, I bring you good news of great joy that will be for all the people. For unto you is born this day in the city of David, a Savior, who is Christ the Lord. And this will be a sign for you: you will find a baby wrapped in swaddling cloths and lying in a manger.” And suddenly there was with the angel a multitude of the heavenly host praising God and saying, “Glory to God in the highest, and on earth peace among those with whom He is pleased!” Luke 2:10-14

“For to us a child is born, to us, a son is given; and the government shall be upon his shoulder, and his name shall be called Wonderful Counselor, Mighty God, Everlasting Father, Prince of Peace.” Isaiah 9:6

The Christmas carol (the song, not the movie) Joy to the World, was written by Isaac Watts way back in 1719, nearly 300 years ago; and it remains one of the most popular of all Christmas carols to this day. It’s lyric is both profound and simple, theologically meaty, yet blended making it easily digested. The funny part is, it wasn’t written as a song or hymn or Christmas carol at all, rather published in a book of poems and later set to music. It was Isaac Watts’ look at Psalm 98. Now, we have looked at some of the difficulties of Jesus’ birth, and since no one really likes a Debbie-downer, let’s just let joy be joy this week.

Let’s look at this verse:

Here is the reality, whether a person accepts Jesus or not, doesn’t, in any way, affect His being King. There is a popular statement going around since Donald Trump was elected President of the United States, “Not my President.” Well, i hate to break it to you, regardless of how you feel about him, he is the President of the United States, and if you are a citizen of the USA, he is your President. In Roman’s it is written; “As I live, says the Lord, every knee shall bow to me, and every tongue shall confess to God.” (Romans 14:11) It is a direct reference to Isaiah 45:23. Paul refers to it in his letter to the Philippians 2:10-11; “so that at the name of Jesus every knee should bow, in heaven and on earth and under the earth, and every tongue confess that Jesus Christ is Lord, to the glory of God the Father.” So, yes, Sir Isaac Watts, let earth receive her King! And let every heart prepare Him room!

And this verse to wrap things up:

No more let Sins and Sorrows grow,
Nor Thorns infest the Ground:
He comes to make his Blessings flow
Far as the Curse is found.

To the believer, this should be of great interest. “No more let sins and sorrows grow, nor thorns infest the ground.” We are called to live in the righteousness of God. If then, Jesus dwells in us, should we keep on sinning? No, by no means is that possible. We are called to be holy as God is Holy! It is not by our own doing but Christ in me that makes me victorious over sin and death. Now the flesh is weak, and we are definitely in a spiritual battle but as is observed in Watts poem, “He comes to make His blessings flow, FAR AS THE CURSE IS FOUND!” That is joy!  So, this Christmas, as you sing this carol, sing it with Psalm 98 in mind:

13 Now when they had departed, behold, an angel of the Lord appeared to Joesph in a dream and said, “Rise, take the child and His mother, and flee to Egypt, and remain there until I tell you, for Herod is about to search for the child, to destroy Him.” 14 And he rose and took the child and His mother by night and departed to Egypt 15 and remained there until the death of Herod. This was to fulfill what the Lord had spoken by the prophets, “Out of Egypt I called my Son.” Matthew 2:13-15 ESV

Peace, each Christmas we look at the Advent, and we talk about peace. We know Jesus as Prince of Peace, yet, as we look at the story of His birth, peace is not the first thing that comes to mind. Joseph and Mary in order to comply with the senses travel to Bethlehem for the census. Mary is well into her pregnancy, and as they arrive, inevitably delayed by slow travel of a pregnant woman on foot or even a donkey, there is no room for them in the inn.  The Inn Keeper not being without heart things of the best he can do, a stable will have to do. Giving birth in a stable is probably far from what some would say is peaceful. Shepherds approach after being surprised in the field by angels. Certainly, brought some trepidation to the new parents. This scene does not have the earmarks of peace.

In the passage at the top, we read that Herod wanted to have the baby of this poor couple killed. So, in a flight for their lives, they head to Egypt in the dark of night. Hardly, peaceful! In fact, it wasn’t peaceful at all for the boys left behind. Many children were killed. Matthew 2:16-18 tells the story: “Then Herod, when he saw that he had been tricked by the wise men, became furious and he sent and killed all the male children in Bethlehem and in all that region who were two years old or under, according to the time that he had ascertained from the wise men. Then was fulfilled what was spoken by the prophet Jeremiah: ‘A voice was heard in Ramah, weeping and loud lamentation, Rachel weeping for her children; she refused to be comforted because they are no more.‘” i do not see peace here either.

As Jesus grew up, under the radar for most of His life, we see relative peace. However, from the start of His earthly ministry, we don’t see peace. We see great things, don’t misunderstand me, but we do not see true, lasting peace. Here is why, Jesus, Himself said, “I did not come to bring peace but a sword.” This statement seems to go against His nature until you dive into it and see what is meant. True and lasting peace is from the Father and will not be present until Jesus’ earthly Kingdom is set. If we read in Revelation, we will see that even after the Millenial Reign of Jesus there is a time that Satan is loosed again and will deceive many, before being ultimately and forever defeated.  (See Revelation 20:7-10)

So, again, this peace is a peace of mind and heart in a world that is fraught with sin and deception from the chief liar, Satan. We find peace in Christ when we give our lives over to Him. He is the author and perfector of our faith. He is the Everlasting, the Alpha and Omega, He is the only One, the Way, the Truth, and the Life. Although, the world decay around us, we have hope and we have peace that Jesus has overcome already, and our victory is in Him, Jesus our Lord!